Terry Holloway’s video performance group THE FUZZY BEUYS, are going to be lighting up Kesey Square downtown in Eugene. The event is on Friday, August 2nd from 8:30 to 10:00 pm at Willamette and Broadway in downtown. The Fuzzy Beuys will be performing their improvisational set titled, “Mind at Large” starting at 8:30. 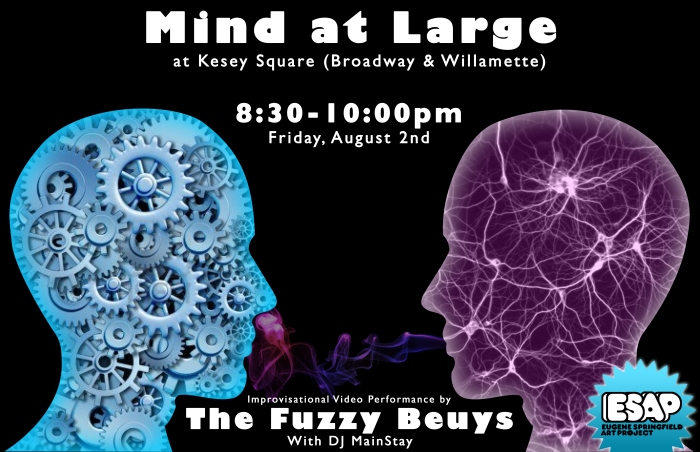 “Mind at Large” (Kesey Square/Broadway Plaza) A psychedelic multimedia event by improvisational video group, The Fuzzy Beuys.  This event will include audience interaction, improvisational video, and a live soundtrack by DJ Mainstay.  “Mind at Large” refers to a philosophy that believes Psychedelic drugs are thought to disable filters which inhibit signals related to mundane functions from reaching the conscious mind.  It is based on the idea that the human mind filters reality, because handling the details of all of the impressions and images coming in would be unbearable.  Along with this, some believe that psychotropic drugs can partly remove this filter, which leaves the drug user exposed to Mind at Large.  In this state, space, and dimension become irrelevant, and perceptions seem to be enlarged and at times even overwhelming.  On Friday, August 2nd, The Fuzzy Beuys will be that drug that releases the “Mind at Large.”  8:30-10pm, FREE!