Our proposal is to project a large image/scene that viewers are forced to view “through” a window. We plan to use 1-2 video projectors to project a large “extra wide” image on to the trees. We will be backlighting the trees so the image disappears and is lost in the background. There will be a large window on a stand with wheels that viewers can roll around a designated area to reveal different narratives and elements of the scene. The scene will be comprised of ambiguous narratives and digital textures, only revealed on the frosted glass in between the panes. These narratives and textures will change and shift into different scenes throughout the night.

During the COVID lockdowns we all got an overdose of being isolated and relatively separated from each other. Many of us worked only from home and spent more time indoors than we used to. We sacrificed doing the things we loved and seeing people we cared for to stay home and be safe. This installation is a commentary on that experience and any moment where you may want to see the whole picture laid out in front of you, but are forced to view just small details inside that image.

All materials will be secured temporarily and will leave no trace upon removal. 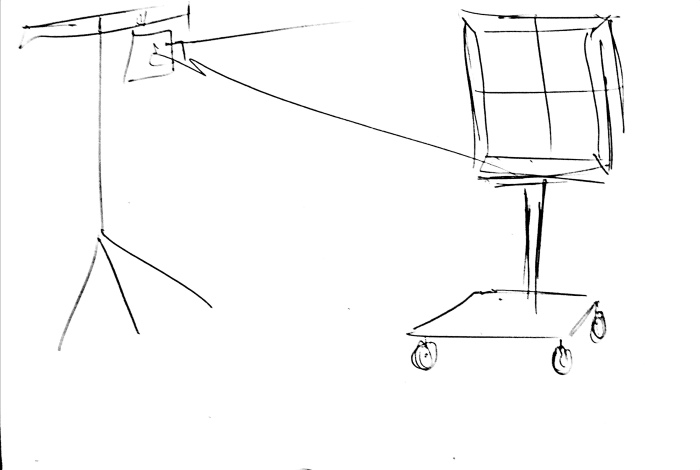 Fuzzy Beuys [pronounced: fUHz-ee byOO-eez] is an arts and entertainment group based in Eugene, Oregon. The group was originally established in 2005 as an art collective featuring local media artists working in technology. Their work uses video manipulation, digital content, and found footage to improvise video and musical performances. Their goal is to bring wonder and levity to the community by means of projected visuals, designed sound compositions, and interactive installations. The Fuzzy Beuys perform using interstitial and communal spaces, seeking engagement with unassuming spectators. They strive to inspire curiosity and joy through art and technology.

“This land was donated in 1863 by Charnel Mulligan
and Eugene Skinner in perpetuity for Lane County use.
Each gave a portion of his Donation Land Claim.
This was a meeting place for pioneers who tied
their horses to the hitching rail while conducting
business. That future generations may be aware
of their valuable contribution.”